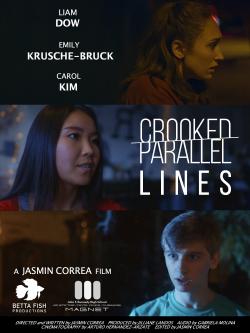 I directed my high school senior film, "Crooked Parallel Lines" based on my own struggles with OCD. I personally struggle with colors especially green and red, I see green as good luck and red as bad luck. I end up spending a lot of time avoiding red and constantly touching green things. In addition to that I also had problems with numbers and organization. It was all due to stress and anxiety. I thought if I could control certain things in my life, then bad things wouldn’t happen to me. Except, my obsessions ended up controlling me instead.

For my senior thesis after three years in the film program, my film teacher told us to try and write a script based on something important or meaningful to us. After a few drafts, I decided to write about my OCD, I felt that a lot of people don't know that OCD isn't just the need to be organized and clean, it is so much more and much more debilitating. I would spend 3 hours a night or more doing rituals only to go to bed late because of them. It was infuriating and exhausting to do them and hide my behavior in fear that people wouldn't understand and think it was weird. I feared people would get mad at my irrational behavior.

The film's story is about a girl, Lottie, coming out to her friend, Atticus, about her OCD. He means well, but his character represents an outsider who inadvertently tries to “cure” her, but really just needs to understand that many mental disorders, like OCD, are irrational and cannot be cured by a quick change of mindset. Dhalia, a character introduced later on as Lottie’s best friend, represents passive support and positivity. While Atticus actively tries to help Lottie, Dhalia sees herself as a shoulder to lean on and a person to vent to. They both represent a balance of being there passively for someone who may feel alone, and actively helping someone when they ask for such help. The story overall was meant to show the frustrations of OCD in everyday life and the struggles one may face with people close to them. My friends are very supportive of my OCD, but sometimes they grow impatient and don’t understand why I act a certain way and can’t control it. In the moment, it feels like one quick ritual, until it becomes an obsession, but by then it’s too late.

When my crew members read my script, they told me they had no idea OCD was as complex as it truly was. Some of the actors and actresses that auditioned for my story told me they also had OCD or that the story refined their view of what OCD was. It was then that I knew that the disorder was still a topic many were misinformed of. I wanted my story to show people what OCD actually was like and that trying to “cure” or say “get over it” to someone is wrong and does not help. I also wanted to show people who are personally struggling that they are not alone and the frustration is real, that even though your friends may not understand, they will understand that you need support. Most importantly, at the end, I wanted to show that Lottie was going to therapy and that it is not something to be ashamed of. Both her friends were happy that she was receiving help, and I wanted to portray that to the audience, receiving help should be a celebration and an achievement. Getting help is a sign of strength, not weakness.

I believe it was easier for my crew, actors, and I to stay motivated while filming because we had an actual message to send to our audience. Although my crew or actors may not have had OCD, they could understand the concept many feel when needing support and help while struggling through anxiety, depression, etc. So sending a message that talking about your struggles and seeking help is perfectly okay is something near and dear to our hearts.

I decided to reach out to ADAA with this experience because I want others who suffer with mental illness to know they can also express their experiences and emotions through a creative medium. People, especially young adults, expressing their struggles in a creative way allows the conversation about mental health to become normalized and less “taboo”. ADAA is a platform that allows individuals to share their experiences and inspire others to come out with their own stories, creating a community that speaks for those who may not understand mental illness and those who feel alone with their mental illness.
-
Jasmin Correa
Director of "Crooked Parallel Lines"
John F. Kennedy Architecture/Digital Design/Filmmaking Magnet High School