My Experience as a Black Artist with Racial Trauma 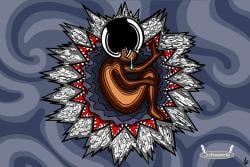 “Discarded” and “Subjugated” are part of a series called "Surviving in Isolation: The Black Mental Health Experience." These pieces are featured in Atac160 x ARTivism Initiative’s activism art show “Postcard Project”. Both are about the feeling of isolation and abandonment many black people with mental illness struggle with. As of 2015, only 4% of therapists are black ("How Diverse Is the Psychology Workforce" via APA.org). A 2014 study by AIU showed that out of 35 African Americans and 15 Hispanics, 82% reported communication issues related to race with a non-POC/Caucasian therapist. Mhnational.org states that black people report experiencing racism from therapists. In 2018, The Commonwealth Fund in its article, “In Focus: Reducing Racial Disparities in Health Care by Confronting Racism” notes that these health disparities have had little improvement and that healthcare workers must recognize how racism affects treatment. When reaching out for treatment we’re met with apathy due to our trauma being connected to the topic of racism. As a young black woman with racial trauma, I have dealt with blatant racism in mental health care firsthand. My family and relatives have experienced the same.

Currently, I am still struggling to find a therapist who will not treat me in this way.

I’ve experienced a lot of racial trauma from standing up for myself in a school system within a community that is less than 1% black. The school continuously covered up racist incidents perpetrated by students and teachers.  A counselor told me that racism did not exist at the school. There were countless incidents and many were back to back. In elementary school I was told by a kid, who I thought was my friend, that my history did not matter when he saw I was holding a book about first African American supreme court justice Thurgood Marshall. In health class, a teacher, at the time Trayvon Martin died, stated George Zimmerman was in the right. I stood up for myself by developing an anti-bullying project called “Do You Know Who I Am” on how to combat the rampant discrimination in the school. The project had some success and was even presented at a new school. Unfortunately, when I was preparing to expand the project to various schools, a certain set of teachers rejected the project due to it highlighting the hidden rampant racism within the school environment. The project was suddenly cancelled and I was ostracized and ignored by both teachers and students. 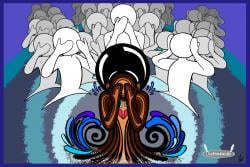 Eventually, I was homeschooled online because my physical and mental health were affected. I told my story to the superintendent and the school system paid for my computer. I learned shortly after that I am at risk of developing Addison’s disease. I developed trust issues, agoraphobia, panic, and anxiety attacks, along with PTSD symptoms from the complex racial trauma I experienced. After leaving public school to become homeschooled online in 2013, my Mom took the initiative to curate local art shows titled “I’m Proud of Who I Am”, with the help of a local artist. Despite some success with these shows, my family continued to face various forms of racism in our community, which caused us to withdraw and become isolated. The current isolation people are experiencing due to COVID19 is not new to me.

Sadly, it took till late 2019 to receive the diagnosis of PTSD and agoraphobia due to my previous therapist refusing to recognize my symptoms as valid. Whenever I told them about my racist experiences, or listed my symptoms and concerns, I was only told "I'm sorry that happened to you". When I asked if I needed a referral for my symptoms, I was told “There’s nothing I can do.” I kept experiencing gaslighting and being ignored and invalidated so often within my community; I felt helpless. I finally told my endocrinologist and my new general practitioner, who are both women of color, as well as my naturopath who has PTSD and has Addison's disease. All three thought I had serious symptoms. My GP diagnosed me in fall 2019. Around this time, I learned that my previous therapist specialized in trauma symptoms, including PTSD, and treatments like cognitive behavioral therapy, but never offered these services.

Currently, the black community is experiencing mental strife due to our high corona death rates and police brutality. I feel it’s crucial to use my voice, my story, and my pen to educate and make the change I and many others have longed for. 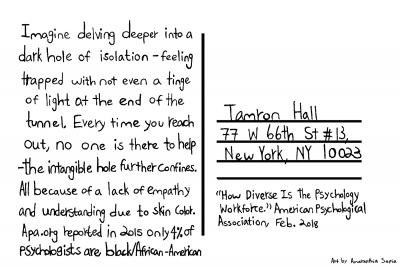 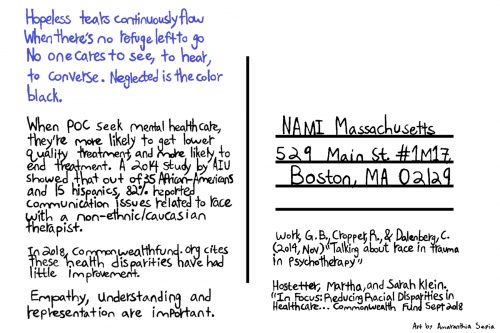