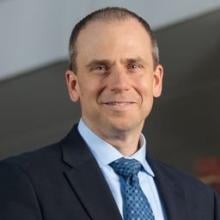 Keith D. Renshaw, Ph.D. is a Professor & Department Chair of Psychology, as well as the Director of the Military, Veterans, and Families Initiative, at George Mason University. He received his doctoral degree in clinical psychology from the University of North Carolina at Chapel Hill in 2003 and was a faculty member at the University of Utah from 2005-2009 before moving to George Mason University in 2009. Dr. Renshaw’s overall research focus is on the interpersonal context of anxiety, stress, and trauma, with a particular emphasis on the experience of combat veterans and their spouses. He has received over $3 million in extramural funding, published more than 80 peer-reviewed publications, given more than 150 conference presentations, and given numerous invited talks on these and other topics. Dr. Renshaw has also won multiple teaching awards, including the George Mason University Teaching Excellence Award (2015). In addition to classroom teaching, he is heavily devoted to the mentorship of doctoral students. Under his supervision, his students have received over $250,000 in extramural funding, published over 50 peer-reviewed publications, and made over 90 presentations at national conferences. From 2016-2019, Dr. Renshaw also served as Chair of George Mason’s Faculty Senate and the faculty representative to the University’s governing Board of Visitors (BOV). In 2020, he led the creation of George Mason’s Military, Veterans, & Families Initiative. As the Director, he is overseeing the formation of community partnerships, creation of new virtual programming, development of new programs, and fundraising efforts.