According to the CDC, 8.7% of people who have incomes below the poverty level report severe psychological distress.1

Poverty causes stressors such as insecurity and uncertainty about food, housing, and income. Low-income communities tend to have specific characterizations such as limited resources, poor houses, high crime and violence rates, and an inadequate school system, which are all associated with poor mental health outcomes.

On a family level, these stressors can cause an increased risk of mental health problems and substance abuse in the parents, which can lead to child abuse and neglect and in turn cause negative mental health impacts for the child.

On an individual level, poverty can lead to high stress and major physiologic responses, such as high blood pressure and high cortisol levels. With prolonged exposure to poverty, these responses turn into disruptions in brain functioning, which ultimately lead to both long-term physical and mental health consequences. 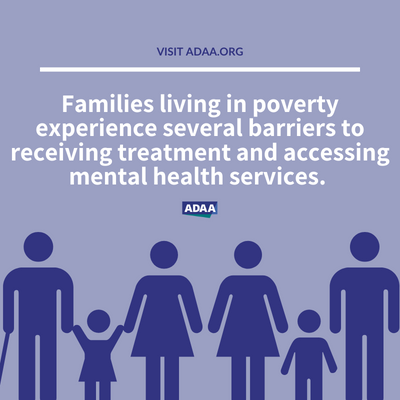 Families living in poverty experience several barriers to receiving treatment and accessing mental health services. One of the primary barriers is the lack of health insurance, which prevents families from being able to afford treatment. There is a limited number of mental health providers under managed care plans, making it harder to access treatment at reduced costs. Families living in rural areas have to travel greater distances to access care. Mental health providers generally require several visits prior to prescribing treatment, which is inconvenient to low-wage workers who can't afford to make doctor visits during business hours.

Stigma is another barrier faced by low-income communities. People suffering from anxiety, depression and co-occurring disorders in such communities not only experience the stigma surrounding mental health, but also that of living in poverty, which ultimately can lead to self-discrimination as well as a lack of self-confidence.

When choosing a provider, it is important to ensure that the provider is aware of the barriers to treatment faced by those living in poverty and low-income communities and is able to discuss them in a culturally competent way.2 When meeting with your provider, ask questions to get a sense of their level of cultural sensitivity, such as whether they have treated others in a similar financial situation as you, received training in cultural competence, and how they plan to take your experiences and current socioeconomic situation into account when suggesting treatment. Learn more about types of therapy and choosing a provider.