What is Depression and How Do I Know If I Have It? 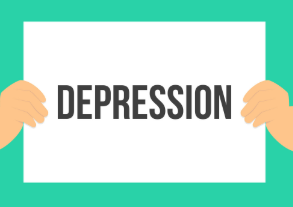 Everyone has bad days when things just aren’t going well and we just feel off. This can be in response to some bad news like getting a grade that is less than stellar or your friends are too busy to hang out. Sometimes when we find our bad day seems to last day after day, then that may mean something else is going on.

Depression is a term that covers a great deal of meanings and references. In economics, depression refers to a “sustained, long-term, downturn in economic activity in one or more economies.” In kinesiology, depression is “an anatomical term of motion that refers to downward movement, the opposite of elevation.” In weather, depression refers to “an area of low atmospheric pressure characterized by rain and unstable weather.” In terms of mood, depression refers to a sustained mood that is low, sad, down, blue. When the mood continues for two weeks or more and occurs for most of the day that may indicate an illness called major depression.

In addition to the persistent down or low mood, major depression also includes a change in interest or lack of pleasure in usually enjoyed activities where the individual just doesn’t feel like going out with friends, going to parties or even eating favorite foods (they just don’t taste as good anymore). Sleep is often altered or changed, like having trouble falling asleep, waking up one or more times in the night or awakening a few hours before normal and not being able to fall back to sleep. It can also include the opposite—sleeping more than usual. Frequently someone who is depressed also feels tired, exhausted or has no energy, stating that it’s hard just to get up at times and move. S/he may find his/her concentration is off, what used to be easy becomes difficult, like reading, following conversations or the plot of a movie.

When the mood is low it can color lots of perceptions, including feelings about ourselves, making us feels less than or even worthless. Sometimes depressed people find their thoughts focused on past mistakes or bad experiences that they usually don’t think about or haven’t thought about for a long time which may create lots of guilt and shame. It’s not too difficult to follow that thought path down to the point where the person thinks about dying, wishing s/he were dead or thinking about ending his/her life.

The good news is that this condition is temporary and very treatable. There several effective treatments for depression including cognitive behavior therapy (CBT), interpersonal psychotherapy (IPT), behavioral activation (BA), acceptance and commitment therapy (ACT) and antidepressant medication. Find more information about these treatments on the ADAA website as well as how to find a clinician who can practice any of those therapies. Everyone has down periods, but if yours goes on and on, it may be time to get some help.

Cindy Aaronson, MSW, PhD, is an Associate Professor of Psychiatry at Icahn School of Medicine. She is a clinical researcher and practitioner specializing in generalized anxiety disorder, panic disorder and major depression treatment using cognitive behavior therapy. Dr. Aaronson is past secretary of the ADAA Board of Directors and co-chair of the ADAA Conference Committee.

I dnt knw wht is going on…

It's a chemical imbalance. …

It's a chemical imbalance. Fix this with proper medication and get better!

I don't really know why I'm commenting right now but I'm so scared of what I'm capable to do. I was usually a really happy person and all but since I've moved little by little all of that happiness has vanished. I don't feel myself anymore and simply don't feel alive as much. Really scary thoughts of suicide have gone by my mind to many times a day and i try so much to convice my self that it isn't necessary. Even thoughts of doing drugs might be my escape passes through my mind. I don't know what to do anymore I thought about seeking help with a professional but i can't do it in person. I've been like this for 6 months by now. I thought i would be better by time but it just gets worst. I don't know if i have depression but something isn't right with me.

I was an absolutely happy person, always laughing and smiling. A day by day I started feeling more angry inside I felt like I was a disappointment and worthless. I didn't tell anyone (I still haven't) I feel like my family wouldn't believe me and think im drawing attention to myself. I cried for nights, I was so tired in the morning and im just... scared. I don't know what to do and I once my brothers we're arguing and shouting and screaming and I just said: THATS ENOUGH! IM DONE. I CAN'T TAKE IT ANYMORE! and I rush to the kitchen and my brother stopped me. and I left. I cried again screaming in my head saying: Why, why me....? I felt so lost. but I realised: I attempted to take my own life and I lost control I just wanted to slit my wrists but I couldn't. I just couldn't and I was really young like 13 or something like that. I never had a good childhood. I don't know what to do my parents will think im pathetic and Im scared my friends or my siblings will think different of me.. help me please.

It's okay to be scared sometimes we all are. All we want to do is shut out the world and just die. We don't want the people we love to feel pain so we let go of them like a dog on a leash. All the pain we felt was just evidence that we're alive. They will think different of you but in a good way because they will care for you and might never leave your side.

That is true . i like to shut out the world but when im in it things go wrong and people make it worse but nobody thinks about me in a good way . i just know it . im usless ans worthless a failure and many other things and i hate love . I dont really believe in love but when I see eople together i think Fake love . I need help but i dont know how and where I should get it .

i have lost my appetite, i feel really sad all the time and i have little energy and feel fatigued. ive also started to drift away from my friends i think. i am quite worried that i have some sort of depression :(

I do too..But I always say That I have normal appetite. But my parents started to notice it actully..But..I hope you're fine..:D

What happened to me?

I didn't know what happened to me lately..I was happy, always smile and Having a great time, when I was 12. everything starts to change and gets worst. everyday, I always put a fake smile, gave advice and started to talk about how great others people are..so that they won't be in the same situation that I am. I always wanted to cry, I felt very hopeless and a shame about myself, I always felt like I should just die but I am to scared to do it..I always feel I am not worthy and called myself useless everyday. I am very bad at socialize...I didn't even wanna accept myself being depressed and a mistake person that others don't need. even though I am..I always say that I am alright.I am all good.I am fine..Guess, that it..

did i have depression?

lately im always felt very lonely and it makes me felt very sad . I always cry for no reason . I’ve been struggle for studies, i have fail many subject and i felt like im such a failure . i felt very down for a month , i felt like i dont deserve to studies because no matter how much I've struggle to pass the exam , i always fail .