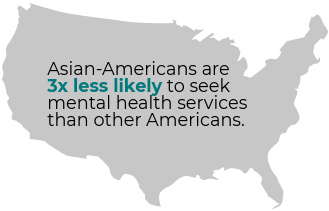 Over 19 million people in the United States identify as Asian-American or Pacific Islander, and of that population, more than 13% were diagnosed with a mental illness in the past year.1

It is important to find a provider who demonstrates cultural competence - which describes the ability of healthcare systems to provide care to patients with diverse values, beliefs and behaviors and taking into account their social, cultural and linguistic needs.3 Unfortunately, research has shown lack of cultural competence in mental health care, which results in misdiagnosis and inadequate treatment. When meeting with your provider, ask questions to get a sense of their level of cultural sensitivity, such as whether they have treated other Asian-Americans, received training in cultural competence, and how they plan to take your beliefs and practices into account when suggesting treatment. Learn more about finding the right therapist.