Is Your Child Scared By Halloween? A Cognitive Behavioral Therapist Offers Help 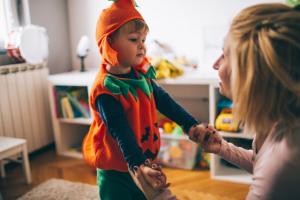 It’s almost Halloween!  My favorite holiday of the year – why? Because it’s not possible to be perfect on Halloween, and I embrace the imperfect. Other holidays have a perfect image we measure our own celebration by, but not Halloween! On this one day, the gory and the grimy rule. We all savor our shivers of fear about horrors we normally avoid. Terrifying movies! Ghosts! Devils! Spiders! All are out in force for Halloween.

The same things I revel in, though, can be frightening for a child. It’s a night that is unpredictable, and people don’t act of look the same as they usually do. The key is recognizing that the distinction between “scary” and “exciting” is all about how you label those emotions, and parents can help turn this into a fun experience for even the timidest child.

Start by thinking about your own attitude toward Halloween. When my kids were in elementary school, we made a grave yard in front of our house for Halloween. Every year the ghouls and the skeletons were different, but there was always a large mechanical noise activated spider by the front door.

My kids are now grown, but a new batch of kids on my street eagerly anticipate the ghouls and spiders. It made my heart warm last year when a 5-year-old trick or treater proudly showed his 3-year-old sister where the spider was hiding and how to make it move by clapping his hands.  In cognitive behavioral therapy, we call that exposure – he was facing his fear and moving towards it. The key to making exposure work with your child is to start small and move slowly. Help your children understand that their brain is giving a false alarm about how dangerous a Halloween activity is, and that to re-train their brain, they need to do some of whatever it is that is scary. Be playful, stick with it, and above all show your confidence that your child can handle this experience.

I think about an 8-year-old client I worked with who was terribly afraid of balloons (because they might burst) and other loud, unexpended sounds. We played with un-inflated balloons, we did a bit of an experiment blowing up different levels of balloons and popping them, and he did extended cognitive behavioral homework with balloons at home. He made tremendous progress and was able to have balloons as a decoration for his August birthday party. With that success, we began to get ready for another event he feared: Halloween.

He had never been out trick or treating before. With his agreement, I brought in a few of my smaller decorations for him to practice with. He was initially so scared we had to go to my car in the parking lot to look at them through the window. Eventually, we had them out and then turned on so he could see how they work, making noise and lighting up as he approached them. Our session was during the daylight, so he and his mom also practiced walking up and down their own street at night, thinking about how different everything looked than in the daytime.

On Halloween, tightly holding his mom’s hand and dressed as a cowboy he took his turn at trick or treating. His mom said it was amazing after the first house when he got candy, how he warmed to the task and had a blast. Houses like mine with decorations slowed him down a bit, but he handled them fine. After all, there is fun that goes along with a shiver!

Elizabeth DuPont Spencer LCSW-C is a licensed clinical social worker and Board approved supervisor. Trained as a Cognitive Behavioral Therapist using Exposure and Response Prevention for anxiety disorders, obsessive compulsive disorder and depression she has been in private practice for twenty-five years, working with children, adolescents and adults. Elizabeth is a member of the International Obsessive Compulsive Foundation (IOCDF), the National Association of Social Workers (NASW) and of the Anxiety and Depression Association of America (ADAA). She is a Clinical Fellow of the ADAA, and also received the 2012 Clinician Outreach Award and the 2017 Clinician of Distinction Award. Elizabeth is co-owner of AnxietyTraining.com with a mission to train clinician’s nation-wide in evidence-based treatments. A graduate of Columbia University in New York City, and the University of Maryland at Baltimore’s School of social work, she completed her clinical training at the National Institutes of Health and the Catholic University of America. She is the co-author of two books, The Anxiety Cure and The Anxiety Cure for Kids. Elizabeth works in Rockville, Maryland.