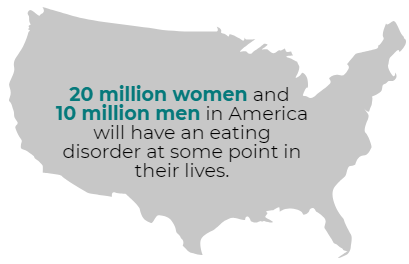 Eating disorders are serious but treatable illnesses that involve irregular eating habits and a severe concern about body weight, shape, or overall appearance. They affect all genders, although rates among women and girls are 2.5 times greater than among men and boys. Transgender individuals experience eating disorders at rates significantly higher than cisgender individuals (Diemer et al., 2015).

Eating disorders are serious but treatable mental illnesses that can affect people of every age, sex, gender, race, ethnicity, and socioeconomic group. National surveys estimate that 20 million women and 10 million men in America will have an eating disorder at some point in their lives.

While no one knows for sure what causes eating disorders, a growing consensus suggests that it is a range of biological, psychological, and sociocultural factors.  While they may begin with preoccupations with food and weight, they are most often about much more than food. It is important to understand that the factors that contribute to eating disorders are complex and multifaceted; they are not simply about weight and they are certainly not choices.

Other Resources from the National Eating Disorder Association (NEDA)