Qué Nervios: Being Latina and Dealing with Anxiety 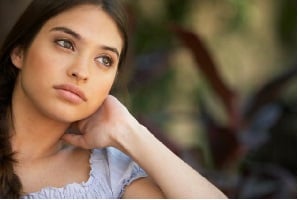 Anxiety is a natural emotion that directs our attention to possible threats.  Although we certainly need anxiety to survive, it sometimes can be a burden.  This is especially true when anxiety appears without an identifiable stressor, is out of proportion to the stressor or creates dysfunction in our social or professional lives.  If the anxiety presents with any of these characteristics, then it might be part of an anxiety disorder, such as Generalized Anxiety Disorder, Social Anxiety Disorder, Panic Disorder, Specific Phobia or Post-Traumatic Stress Disorder.

Although Latinas are at the same risk of anxiety disorders as other ethnic groups, we are not sure if the screening tools and diagnostic criteria we use as clinician are culturally appropriate.   For example, some studies have identified that worries and ruminations might be less prevalent in Latinos, but this might be because Latinos pay more attention to the manifestations in the body, such as heart palpitations, difficulty breathing and tremors.  Given this attention to the physical symptoms of anxiety, panic attacks have been frequently described in Latinos and thus some studies identify that Panic Disorder might be more prevalent.   While we are still not certain on how to adequately address these differences in Latinas, it is clear that ethnicity and culture play a role in how anxiety is expressed.

One particular manifestation of anxiety that is mostly described in Latinos of Caribbean descent is “ataque de nervios”.  These “nerve attacks” refer to an episode of intense emotional expression due to interpersonal stress.  They certainly include anxiety but can also present with sadness, anger and frustration.  “Ataque de nervios” are more common in women and could be used to increase our understanding of stress and anxiety in Latinas.  These “ataque de nervios” are highly comorbid with anxiety disorders such as Panic Disorder and Post-Traumatic Stress Disorder.   At this time, it is unclear if this is a distinct anxiety disorder or if it is a risk factor for anxiety disorders in Latinos.  For example, in our studies at the University of Puerto Rico, we have found that “ataque de nervios” do not worsen anxiety severity but it is related to increased scores in neuroticism, a personality risk factor for anxiety.  We have also seen that these episodes are related to disability and increased suicide attempts, so it is important to identify these symptoms in Latinas and make a referral for an evaluation with a mental health professional even if no other psychiatric disorder is identified.

Treatment for anxiety also needs to take into consideration ethnicity and culture.  In Latinos, as in many minority groups, talking about emotions is not part of their culture.  Thus, treatments focused on cognitive-behavioral therapy, which are the evidence-based treatments for anxiety, tend to be like a foreign language to a Latina.  The connection between thoughts, emotions and behaviors is not clearly seen.  So our treatments need to have a greater psychoeducational component and cannot go directly into cognitive or exposure tasks.

Given all this information, it is important to think about what specific needs need to be addressed in Latinas facing a possible anxiety disorder.   First, it is important to realize that ethnicity and culture need to be considered when screening, evaluating and treating Latinas.  To have truly culturally competent mental health services, we also need to take into account that women and men also express and respond differently to anxiety.  Finally, there is a persistent disparity in access to high quality mental health services among Latinos and these services need to be culturally adapted.

Karen G. Martinez, MD, MSc is a child and adolescent psychiatrist in San Juan, Puerto Rico.  She is an associate professor at the University of Puerto Rico where she directs the Center for the Study and Treatment of Fear and Anxiety. As the director of this Center, she leads an interdisciplinary team in the development of research and treatment protocols aimed at improving the assessment and treatment of anxiety in Puerto Ricans.  This Center consists of an interdisciplinary group of psychiatrists, neuroscientists, psychologists and occupational therapists studying the role of physiological fear on anxiety disorders and cultural adaptation of treatments for anxiety disorders.  She also completed a Post-Doctoral Master’s in Clinical Research in 2006 and is now the principal investigator (R25MD007607) and director of this program.  She also the principal investigator (R21MD013652) of a grant studying the epigenetic and microbial profile of prenatal stress related to Hurricane María.  Her multiple awards recognize her research work including the Career Development Award from the Anxiety and Depression Association of America (ADAA), and a Minority Faculty Award from the American College of Neuropsychopharmacology (ACNP).  She is an active member of several professional organizations, such as the ADAA where she has spearheaded multiple projects in order to increase outreach to diverse population including being the co-chair of the Multicultural Special Interest Group.  She is also part of the American Academy of Child and Adolescent Psychiatry (AACAP) Trauma and Disaster Committee and member of the board of directors of the Association for Clinical and Translational Science (ACTS).

Karen G. Martínez, MD, MSc is a child and adolescent psychiatry and director of the University of Puerto Rico Center for the Study and Treatment of Fear and Anxiety.  She has been an ADAA member since 2008 when she received the ADAA Career Development Award.  She is a member of the ADAA Public Education Committee and the co-chair of the Multicultural Advances Special Interest Group.